A retrospective on perspective

Iteration is the process of doing something again and again until it meets your standards.

It is a common technique in game development and the tech industry, because constant testing and comparing your product's current state to the desired quality level is crucial. Today, we'll have a look at one aspect of A Scholar's Tale that we heavily iterated on: The vista players see when leaving the cave and entering the vast canyon area.

For this particular scene, we tried to achieve the following goals:

With this mission statement in mind, we started to build a first iteration of the scene. 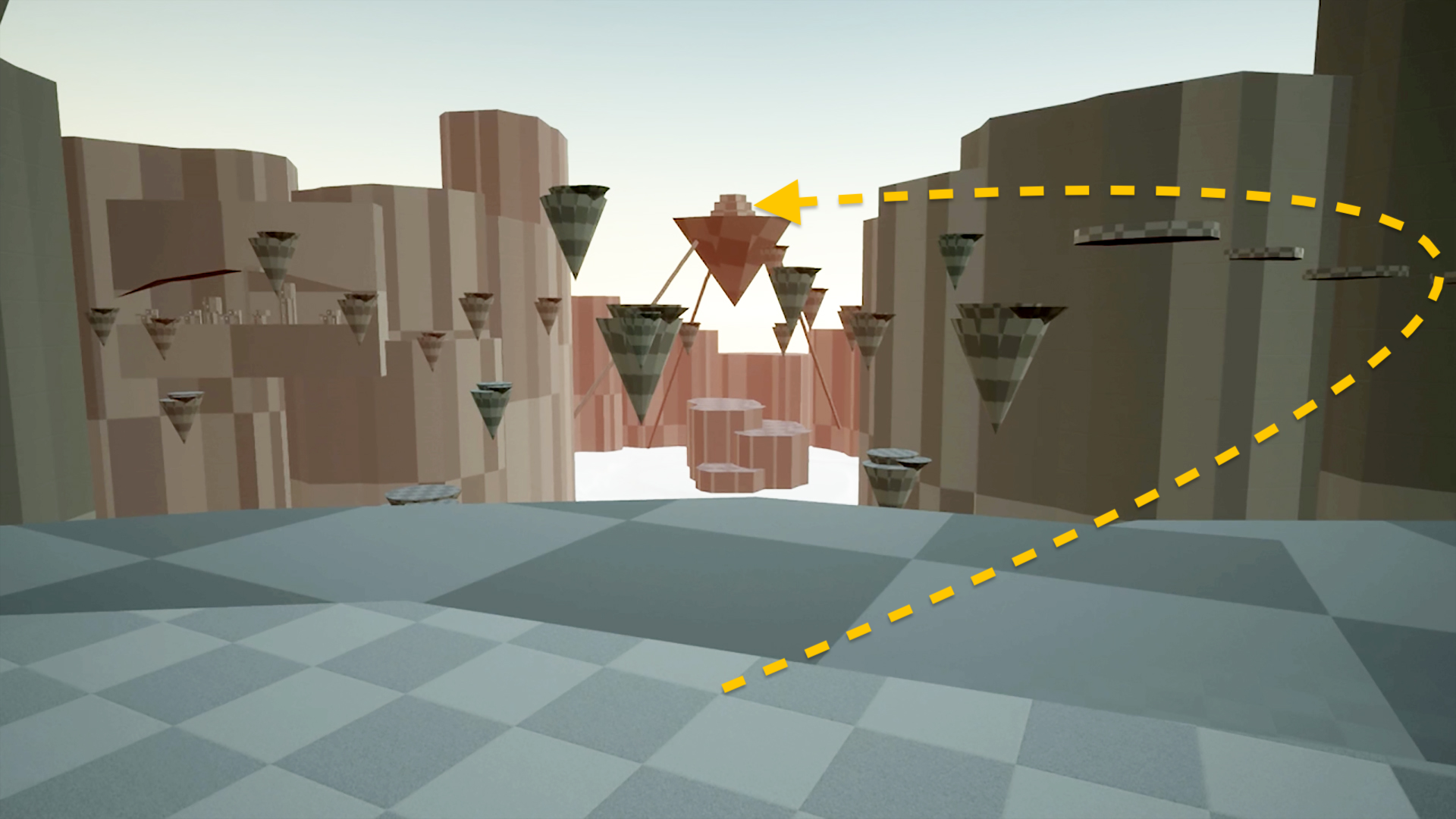 This blockout consisted of simple geometric shapes. Building it helped us to evaluate the size of the space and to find ways to present the landmark and the path leading to it. The temple seemed to fulfill our landmark requirement, but we soon noticed that including such a high number of flying islands confused players. The 2nd iteration solved this by reducing the number of islands to provide a much clearer path to the temple island. In addition, we increased its size to make it stand out much more. 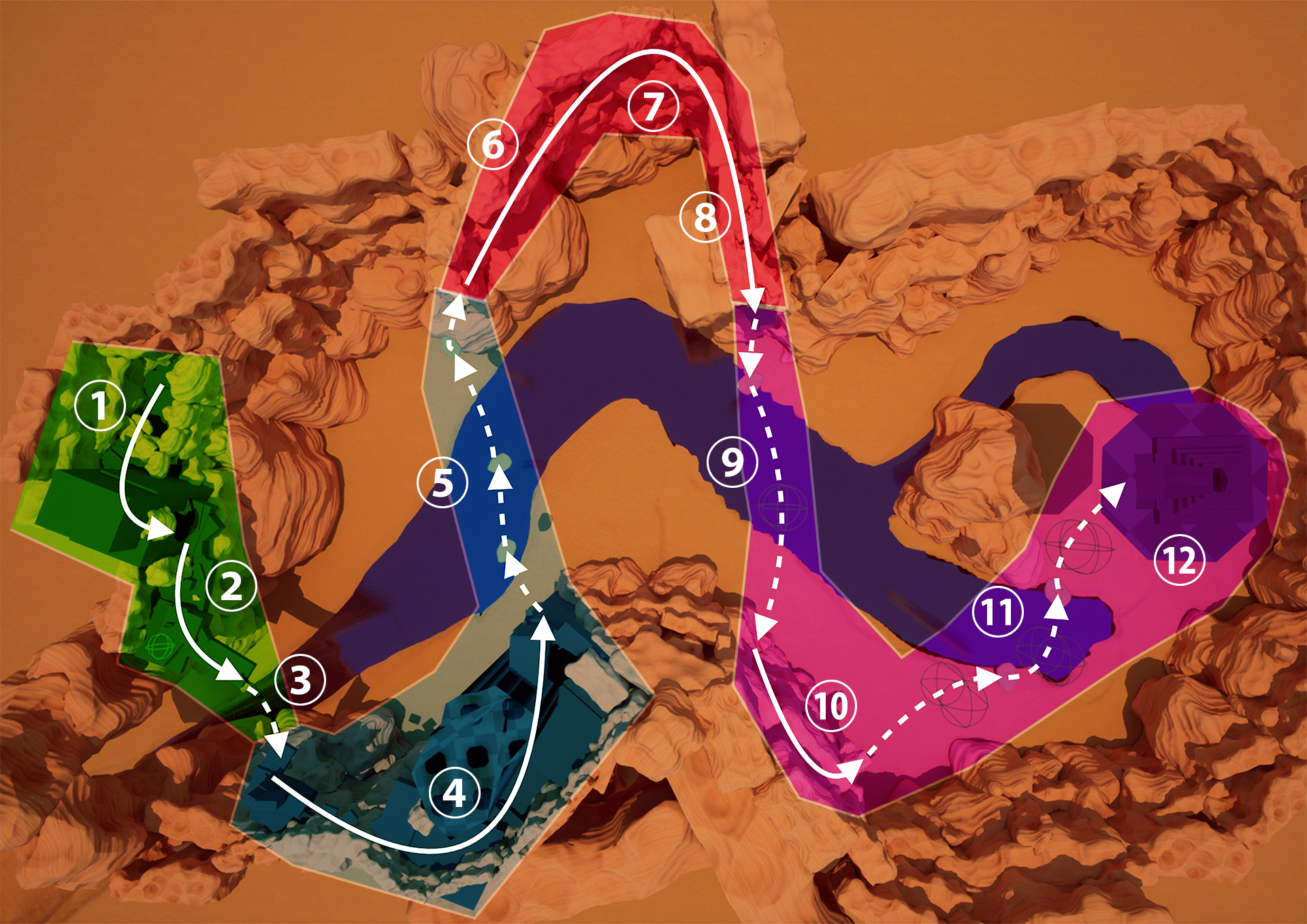 An important byproduct of this design process was this map layout scheme, which not only helped establish a route to the temple but also made us think about the background lore of the canyon. At this point we've divided the area into sections like the clay pit (4), the village (6) and the sacrificial site (10). In return, this process made us ask questions like "how did the workers transport the processed clay to the village?" which then led to the idea of building a a ropeway along the flying island. 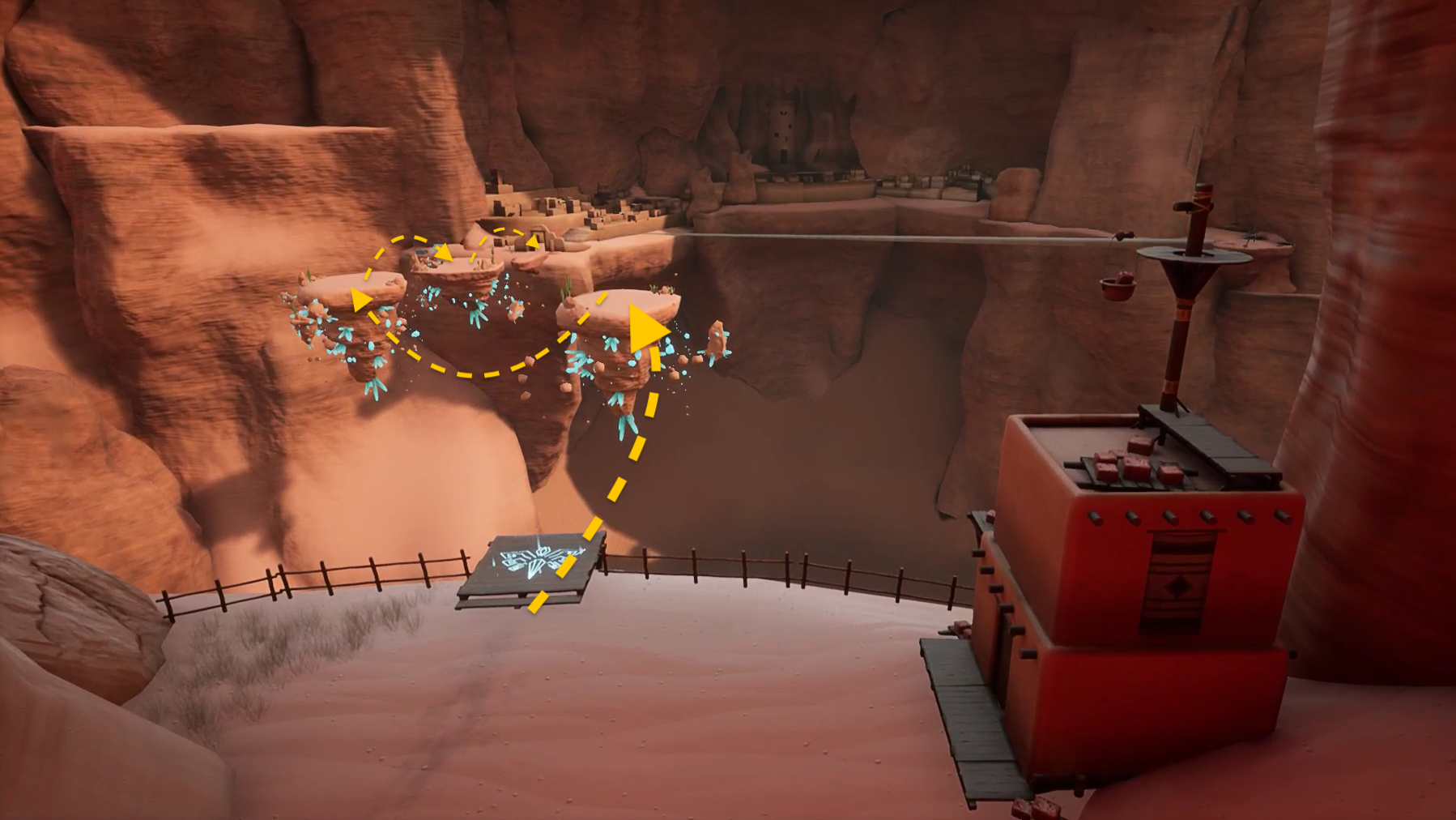 Doing so not only made the world more believable and grounded, it also helped guide players as the ropeway established an in-world connection between the two areas. In addition, little tweaks like  color-coding the crystals to match the glider symbol on the jump pad help to communicate an affordance. 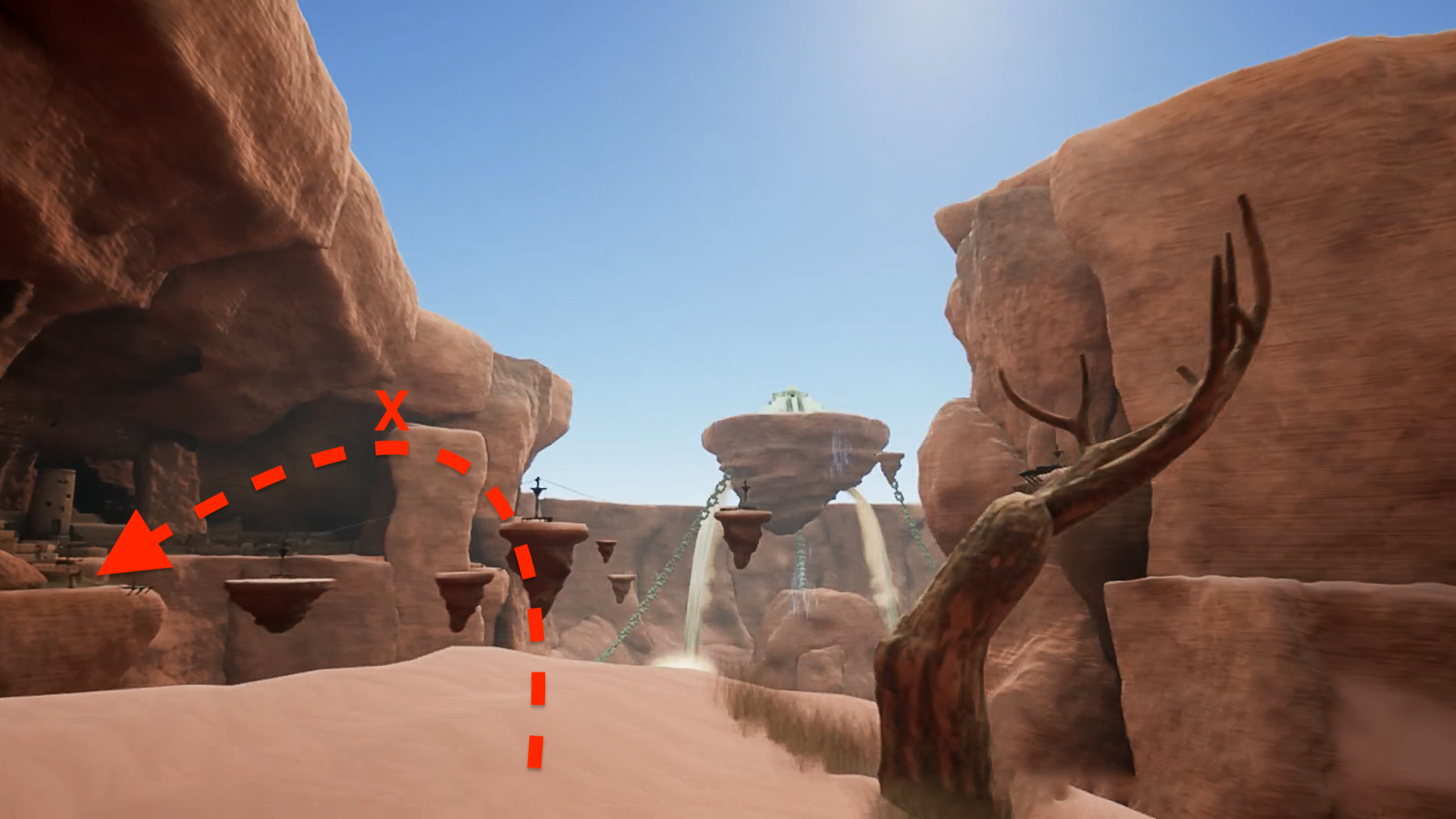 However, our playtests showed that these measures didn't suffice. For instance, some players still tried to directly jump to the village, which of course didn't work as the gap was too big. Now, even though letting players fail and retry a section is perfectly fine in many games, this didn't match our design goal of evoking flow through constant progression and narration. More importantly, the temple island still wasn't prominent enough. So we went back to the drawing board in order to create another iteration. 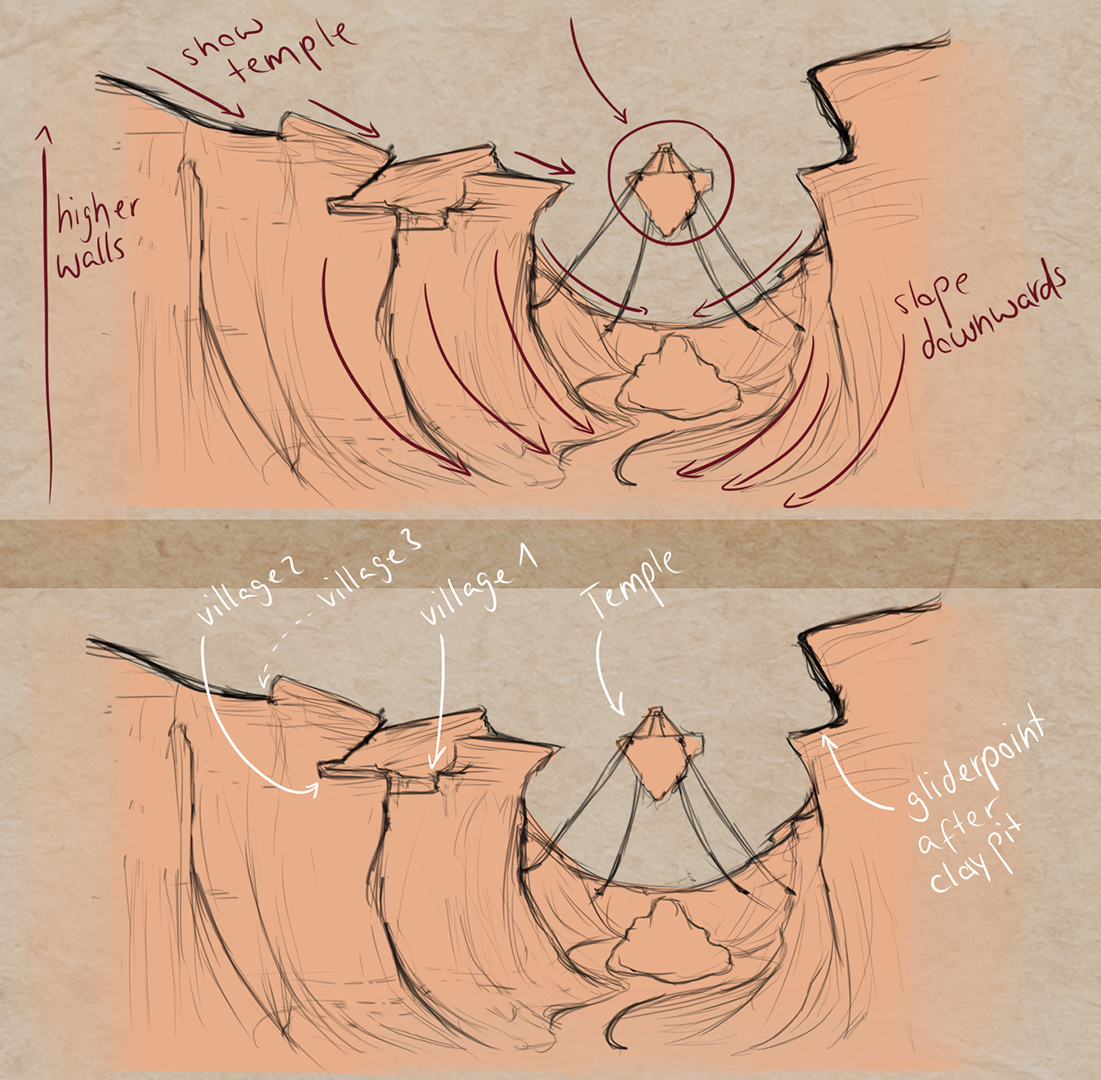 This reconception involved visually separating the temple island from the surrounding cliffs by using the sky as a negative space. Furthermore, we increased the size of the island even more and placed it higher above so that it stands out more. Rearranging the rocks to create a downward slope also helped to establish a clear vanishing point. 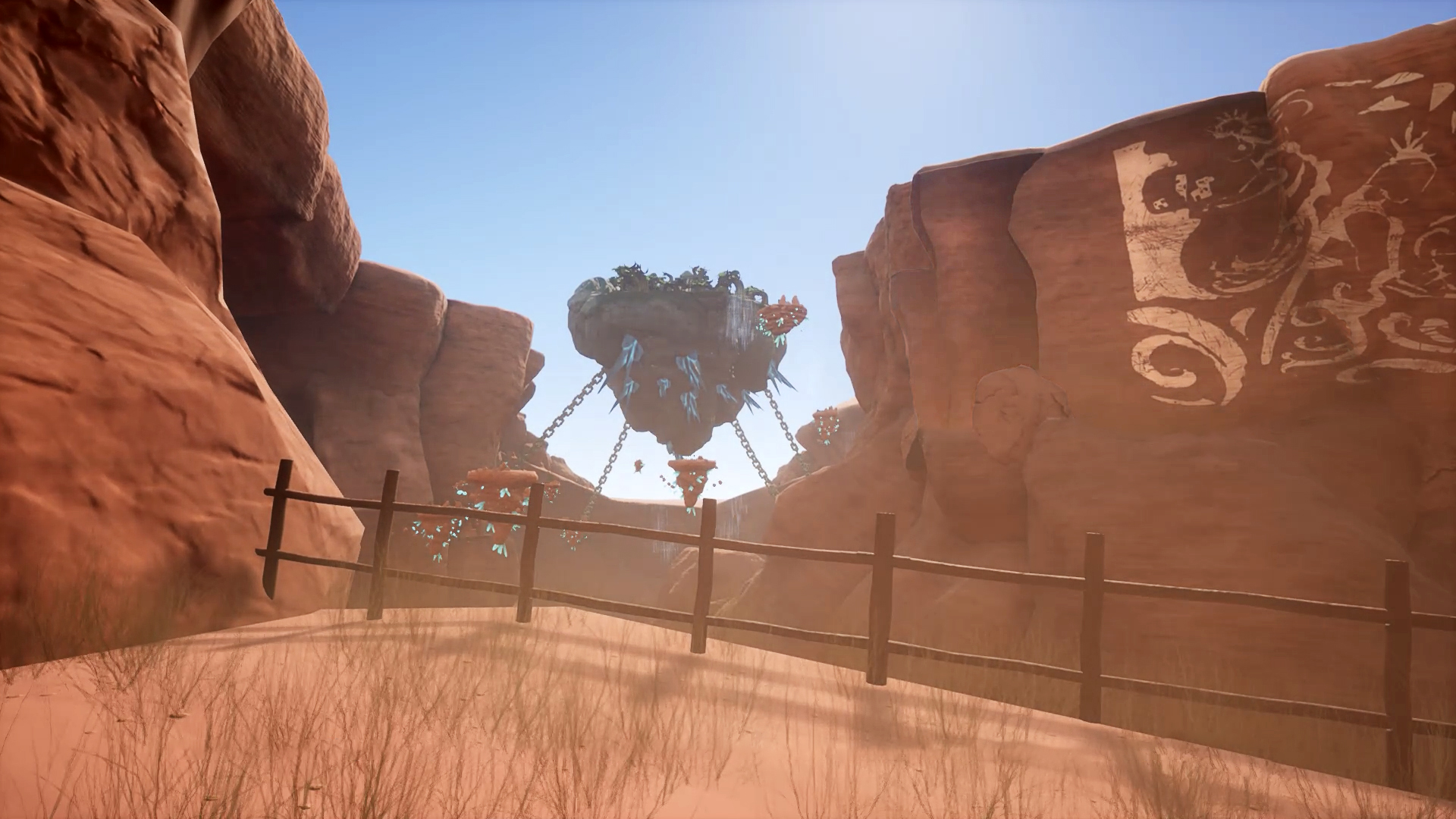 In the final version of the vista, the temple island is now the center of attention. In addition, placing a fence at the border of the platform kept them from trying to take a shortcut to the village, which was now hidden by the big rock on the left. At this point, we felt that the scene meets  our standards and is ready to be included in the final product.

What do you think?

Did you intuitively make you way through the canyon or could we have done better?

Get A Scholar's Tale